We just had a note through from the guys putting on folk opera, Rouse Ye Women! at Greenwich Theatre on 19th Feb. With music by John Kirkpatrick and Neil Gore, its about the true story of Mary Macarthur and the women chainmakers in 1900's.

Press release copied below. Tickets are here if you fancy a night of Folk Opera this February!

A play by Neil Gore based on the true story of Mary Macarthur and the women chainmakers.

The role of trade unionist and strike leader Mary Macarthur will be performed by Scottish folk singer Bryony Purdue. Purdue is an outstandingly versatile and charismatic performer and has sung with UK Opera companies Opera GlassWorks, Longborough Festival Opera and touring ensembles VoxCollective and Transatlantic Ensemble.

Folk singer Rowan Godel will play chainmaker Bird. Godel is a rising star in the music world and has worked extensively with some of the biggest names in folk, including Oysterband (duetting with John Jones on Street of Dreams, Spirit of Dust and more), The Levellers and Ray Cooper.

Women chainmakers in the Black Country in the 1900s started work at the forge as children and spent their entire lives making chains. These women had no vote, were largely illiterate, worked a 54-hour week for ‘starvation wages’, and had to take their children to work.

But in the Autumn of 1910 hundreds of women chainmakers of Cradley Heath held a ten-week strike against their employers. Led by the remarkable trade union organiser and campaigner Mary Macarthur, they won a minimum wage which doubled their incomes.

More importantly, they returned to work confident in the knowledge that by sticking together in a union they could stand up to the chain masters and companies.

The strike was a prelude to the ‘Great Unrest’ of industrial action that swept Britain in 1911, and led to a landmark victory for a fair wage, changing the lives of thousands of workers, whilst proving their economic power.

‘Rouse, Ye Women!’ is a folk-song opera that tells the story of Mary Macarthur and the chainmakers, and shares the story of the lives of the workers and campaigners through rousing, heartfelt traditional song and music.

Director Louise Townsend said: “The focus of the production is not just the massive achievement of the women chainmakers in their fight for better wages, but also how Mary Macarthur and the National Federation of Women Workers, of which she was a founding member, sought to challenge the prevailing view that women made poor trade unionists, were a threat to male employment and wages, and were generally unorganisable.

"Mary Macarthur herself wanted trade unions to educate women workers to be better citizens, empower them to demand more from life and gain fair treatment as workers; to ensure that women can be an effective force within the trade union movement to strengthen the position of the entire industrial working class.

"Through this production we will aim to draw parallels with the inequalities in the lives of women just over a hundred years ago with modern issues of family life, low pay, the minimum wage, the gender pay gap and equality of opportunity.”

Writer, actor and musician Neil Gore said: "The story is truly inspirational because it centres on the energy and drive of Mary Macarthur, and her skills as an organiser and tactician. She came to be admired by her trade union and socialist comrades as well as those in positions of power - employers, business leaders and those in government. But, most importantly, she gained the trust of those women workers that she so skilfully organised and represented. She lived a thrilling, breathless life sustained with unfaltering courage and determination to achieve; she was cool and persuasive in argument and possessed immense good-humour and common-sense. Through this production we aim to celebrate her enormous achievements and her all-too-often overlooked legacy.”

John Kirkpatrick said: “The songs and music for “Rouse Ye Women!” are inspired in large part by traditional industrial folk song, music hall, and protest songs, as well as from projects created within the folk revival period of the 1960s and 70s, themselves based on direct links with traditional music of the past, with a modern, contemporary twist. Industrial folk song originally emerged in Britain in the 18th century from the Industrial Revolution. These workers tended to take the forms of music with which they were familiar, ballads and agricultural work songs, and adapt them to their new experiences and circumstances. They tended to be descriptive of work, often political in nature, and were sung between work shifts or in leisure, expressing workers’ interests and aspirations, and passed on among themselves by oral means.

“Other influences would come from popular and musical hall songs as well as formal hymns that had been adopted by the workers. The various types of song include chants of labour and protest including narratives of disasters, laments for conditions and political strike ballads. Amongst these are also songs about heroic and mythical figures of industrial work.

"There was a great tradition for women to sing at work in the big factories and the back-yard forges, especially music hall songs; their strong melodies and clear narratives having a wide appeal: “They can’t stop us singing! It’s a way of getting rid of the boredom”, as one worker once put it.

“Through the description and poetry or wit and wisdom of songs from this time, one can gain a feel for the hardships and pleasures; the day-to-day struggle for existence, as well as the ways of breaking the monotony of work with descriptions of local events and incidents, or through after-work collective relaxation.

“Through new rousing songs and moving ballads we aim to tell the story of the Women Chainmakers’ Strike by reflecting, imitating and embellishing the styles of music that were most significant to those who struggled to make the strike a success.”

for interview bookings, photos and artwork please get in touch – details below 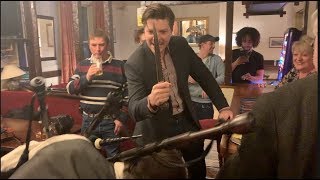 Come all ye and Wassail! And Burns Night plans...

St. George's Day at The Star And Garter